Six weeks after applying for a visa and going through an emotional rollercoaster of panic and pre-emptive dejection, I read these amazing words whilst sat in clinic. It was decided, I was going to India!

For someone who lacks any real passion for anything in life, my anticipation and excitement for this trip could be directly comparable to a six year old on their way to a fayre with a pit top to the candy floss stand. In fact, I would go as far as saying I would put the six year old to shame.

The total duration was three weeks, which was split not so equally between the Joshi parivar, the Priyamvada clan and Smit bhai et al, with the itinerary looking like: Delhi > Agra > Jaipur > Haridwar > Benares > Delhi > Oxford.

My love affair with Delhi had begun a few years back after having read Khushwant Singh’s Delhi. By far one of my favourite reads not just for the amazing prose, however, the excellent grip on the psyche and portrayal of key characters in the history of Delhi from those who salvaged the city and those who led to its attempted ruination, alike.

The tourist sites are all secondary things, what strikes one about Delhi is that it a complete gorakh dandha. Its colours and character can be so strange and foreign, yet at other times she becomes truly and exclusively yours, making you fall in love with herself, multiple times, and every as if this is the first. Oh dammit, I promised myself I would not become a literary romantic. Oh, well.

Being a hybrid Pakistani, it was difficult to not compare Delhi to Lahore and indeed, it had so many similarities; like a divided soul of the new and old city with the history at times carefully simmering and rising amongst newer structures; hundreds of people all dotted about in a chaotic manner, yet having a continuous flow of movement and of course…the food! My stomach was catching up with me from the journey from Britain to India, however, BP Market, Noida. How I miss thee, the kalakand and those chicken paratha rolls (love you, R.D). -Le sigh-

My belief of cities, no matter where in the world, is usually that they are a reflection and product of the people that inhabit it. However, like Lahore, Delhi is independent of that. Delhi stands freely with its abundance of history, architecture and heritage. Even the poets I know and have read extensively – a lot of them are known because of Delhi. It is entirely possible that I have a romanticised view of this city, however, it is what it is.

Admittedly I could not have appreciated the wealth of Delhi’s history without the legendary Smit bhai. The first time I met him on an introductions evening in Brasenose College, we were debating something or other about Indo-Pak. He was charged with statistics, economics and current debates. I was preoccupied with chai and craved conflict. Days of relative youth…Any how, the wealth of information this man carries in his brain is amazing enough, however, his anger and frustration at the tour guides (who often are heard giving not only inaccurate, but blatantly wrong information) errs on the side of hilarity. Smit bhai also needs to be given credit for making me realise the lost clinical interests that I have, namely, in occupational medicine particular to those working in industry, but that story can await for some other day.

The gurudwara was initially built as a small shrine during the reign of Shah Alam the Second in 1783. My travel companion, or rather keeping me in line with an orientation program (titled: How now to be an idiot in Delhi), was the beautiful Kanika Joshi. As I have harped on endlessly to everyone who I have mentioned Gurudwaras to, I am in awe of the community work and voluntary services found amongst Sikh communities. Cleanliness is a form of purity and worship, literally and figuratively – and in Bangla Sahib I found this. 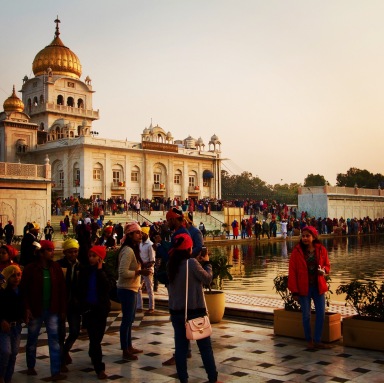 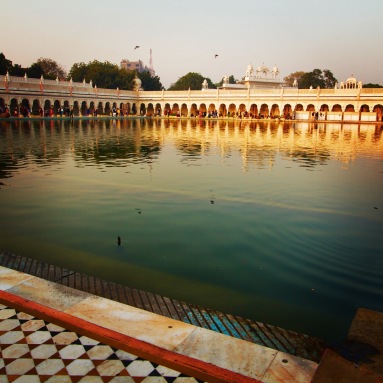 Whilst on the religious theme, Jama Masjid, you beautiful nutshell of nostalgia! Now, it may have been behavioural conditioning, but it was maghrib and the muezzin was engaged in the adhan.  I found my steps quickening up the steps, awkwardly and angrily glancing at a notice saying “women not allowed after evening prayers”, and then stepping into the courtyard. I felt like I was in the heart of Lahore, inside the Badshahi masjid and some corner of my heart rejoiced. Briefly I was jolted into reality and realised I was in the heart of Purani Dilli and inside the Jama masjid and as such, that very same corner of my heart rejoiced a little more.

The Jama masjid is quite smaller than the Badshahi masjid, however, very similar in architecture. Constructed during the time of the mughal emperor Shah Jahan, it was completed in 1656 AD. Its official name, at least at the time, was Masjid-e-Jahan Numa. After the 1857 revolt, it was also temporarily used as a station to place British soldiers. After some moments of masjid step sitting, we found our way to Karim’s. Every Delhi’ite I have met has made mention of this establishment whenever talks of Purani Dilli have taken place. It is an important establishment. It is a food establishment. It was set up in 1913 by the son of a cook of the mughal kitchen. We had kebabs and rumali roti, the queen of rotis -insert hearts for eyes at this juncture-. 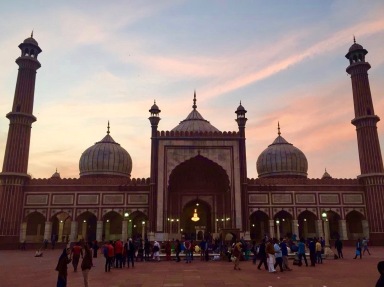 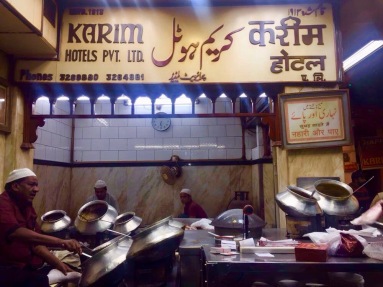 A number of Indians whom I know informed me that Dilli walay are rude and rather unpleasant. I most certainly cannot say I agreed with this, primarily, because it was not an experience I underwent. Either because I did not engage long enough in verbal combat to get a sense of this, or I was equally blasé with humans (as I have often been accused of being). However, there was also not a memorable moment with a local. Agra had Dilshad bhaiyya, Haridwar had LB, Benares had two amazing uncles… the chai walay uncle and then the kachori walay uncle. More on some of these people in further posts.

I guess humans make a significant contribution as to what your personal (or I guess, my personal) experiences are. Having families and their friends with whom I interacted with shaped this journey for the better… I continue talking with some, have some good memories of others and a whole load of positive reflections. Had it been a visit that was very isolated with lone travel, I am not sure I would have had such a positive experience. This reminds me to an excerpt of Khushwant Singh’s City Improbable: Writings on Delhi where he compels you to “draw a balance sheet of what is loveable about Delhi and what is not and you will find that its plus points equal its minus points. So if you happen to be living in Delhi, why uproot yourself and go somewhere else of which you know less, and which may not be worth knowing either?” 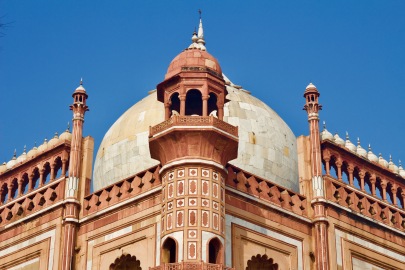 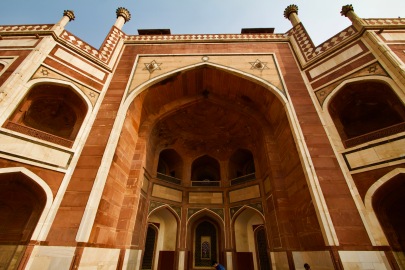 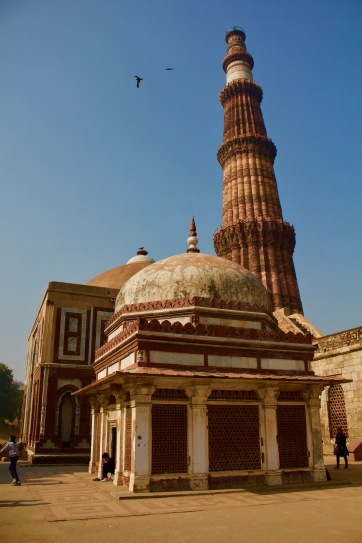 So, what of my experience and relationship with Delhi? Well, we coexisted well…and I left with an appreciation of its history, its heritage and above all, its endurance for all the looting, pillaging and plundering it has withstood and is still withstanding, in a contemporary sense, of course. One final word on what I liked the most about it, its sense of humour and irony. It has been the “mistress of conquerors” but it also holds several mausoleums of such invaders. Don’t mess, yo.

Next in this series of India reflections – India and its very many God’s. Well, maybe, lets see.